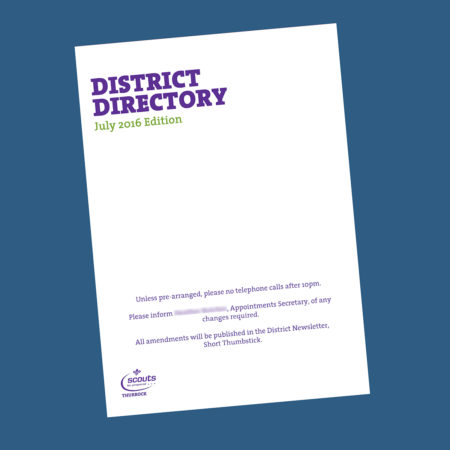 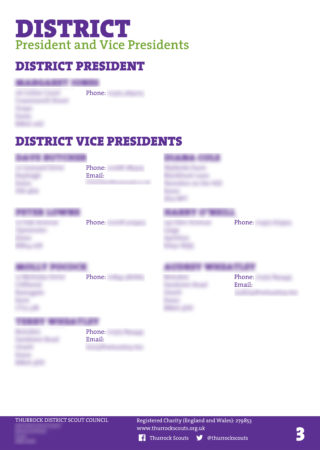 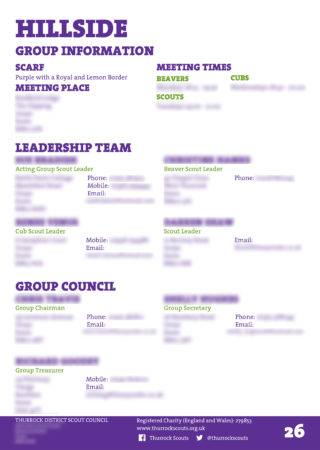 The District has had a Members Directory for a number of years but it was a simple black & white document produced in Microsoft Word using lots of tables. So I decided to sit down and produce a new, more professional looking document as it was in need of a redesign, and to make it “on brand”.

The new design includes colour which I used to break up and separate the large amount of text a list of contacts includes. The green colour, different styles of the same font, and all caps were used to ensure the important information is easier to spot when searching through for a particular piece of information. For example, someone searching for the Scout Leader at Tilbury can easily find the Tilbury page as it’s the largest text on the page, then can see who the Scout Leader is with the green text which sticks out compared to the rest of the purple text.

I also brought in a consistent schedule for releasing updates to the Directory. In the past it was on a twice-yearly release schedule but which months changed all the time. This was not a huge issue as amendments were included in the District’s newsletter and with it being a Word document, members could update their own copies.

With the use of a non-standard font and it being produced in InDesign, releasing a version members could edit themselves was impossible so this meant releases had to be more regular. This led to me bringing in a quarterly release schedule of every January, April, July and October.